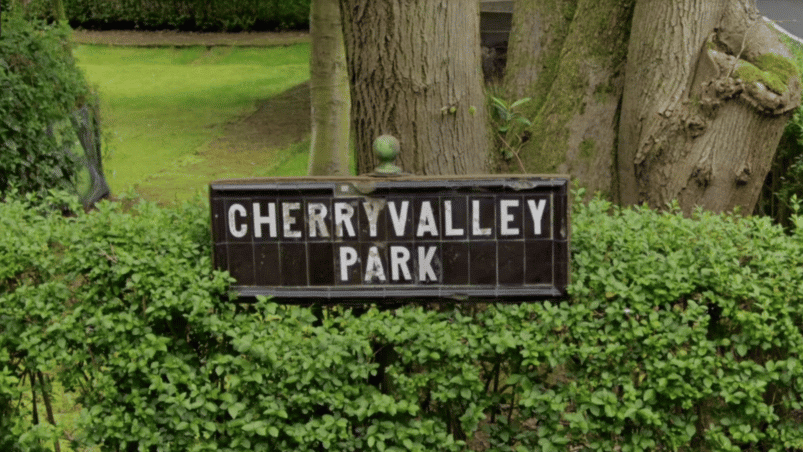 The streetsign at Cherryvalley Park, which was listed in March, could use some restoration work. Image: Google Maps
United Kingdom

Authorities in Northern Ireland listed nine Belfast street signs as civic heritage. The tiled signs were produced during the early to mid-1900s but are rapidly disappearing from the streets of Belfast. As listed heritage, the signs will be preserved for future generations and the city of Belfast.

The Department for Communities is responsible for preserving the city’s street furniture legacy, including street signs. Many signs had been lost over the years due to redevelopment and general wear and tear, the Belfast Telegraph reported. In March nine other street signs received a protected status as well.

Local historians are happy with the decision to protect and preserve the iconic tiled street markers. “I think it is a good thing because they are part of the heritage of the city”, reflects Nigel Henderson, a researcher with History Hub Ulster. “And the tiled signs are more aesthetically pleasing compared to the modern street signs”, he added.

These signs deserve our protection as literal signposts to that past

Apart from the nostalgic aesthetic they provide, Belfast historian and tour guide Jason Burke believes the signs form an important part of Belfast’s memory landscape. “These signs deserve our protection as literal signposts to that past”, he reckoned.

The Department of Communities commented that most of the signs had been renovated and reused over time, often differently. In some cases, renovation workers used different tiles or iron types or added details.

“The Beersbridge Road, for example, has the number five stencilled just below the sign”, a Department spokesperson explained. ‘It’s a reference to the postal district in which the road sits.”