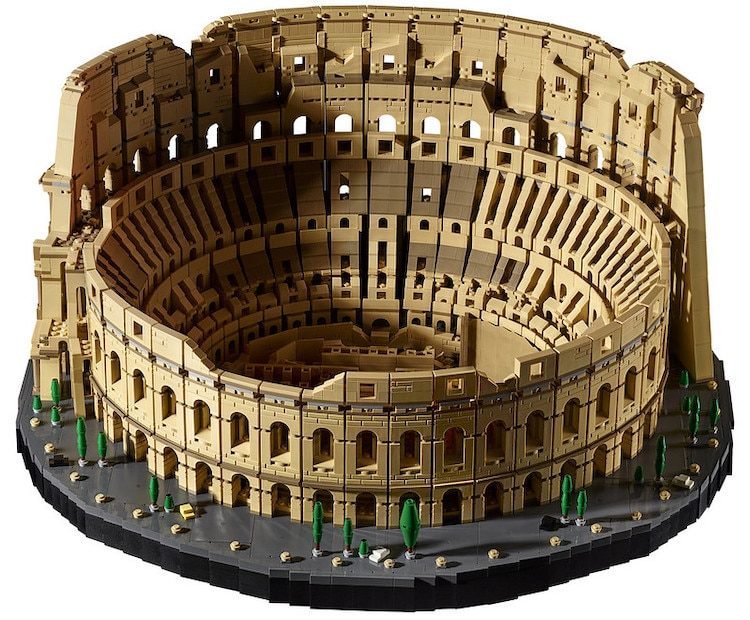 This set has been created to imitate the majestic architecture of the historic Roman amphitheatre. LEGO is set to release the model on the 27th of November, Black Friday. It surpasses the Millenium Falcon Star Wars set made of 7541 pieces.

Both LEGO fans and history buffs are in for some fun with this LEGO kit of the Colosseum created with close-to-life details. For example, the set comes with the 80 ‘ribs’ in the spectator stands, just as the original, and three types of coloured bricks which show the ageing of the monument dating back to 70 AD. It also features a recreation of the three stories on the colosseum adorned with doric, ionic and corinthian columns.

‘One of the biggest challenges and one of the most important things was to convey the Colosseum’s monumentality in the LEGO form,’ comments Rok Zgalin Kobe, the designer of the set. He says he focussed on bringing out the unique architectural feature of the Colosseum: the columns flanking the arches are stylised differently. To emphasise this, the cross-section has been made steeper to create a vertical exaggeration. He hopes that it will inspire people to learn more about the Roman monument.

The building experience mimics the actual construction process, with the ‘wooden’ LEGO arena being the last build to be placed on the model. It is the wooden panel that was rebuilt in the 1990s to show the original level of the Colosseum.

Watch a video on the Colosseum model set here.