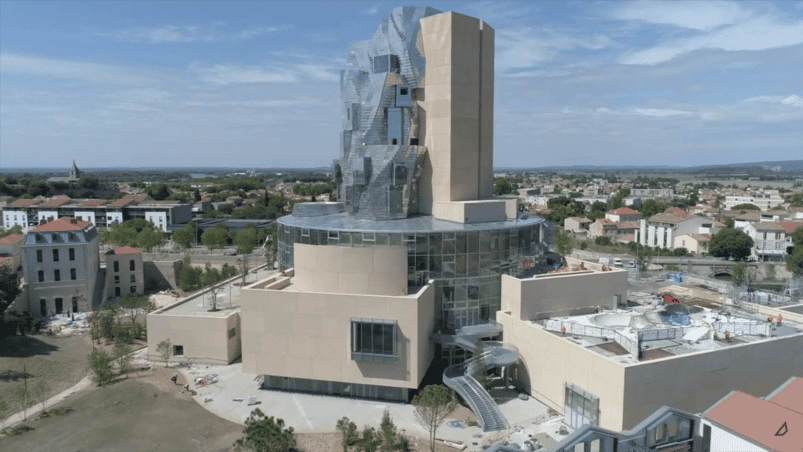 On 26 June, the ancient city of Arles in France officially made a new futuristic addition to its cityscape: the Luma Arles building. The shimmering tower, made from glass and steel, was designed by world-famous Canadian-American architect Frank Gehry. The building is the flagship of a new “creative campus” in the World Heritage city of Arles.

The Gehry tower was built by the Swiss Luma arts foundation that “wants to offer artists a space to create, collaborate and showcase their work”, according to France24. The tower will house contemporary art exhibitions, a library, and offices. The rest of the campus will host conferences and live performances. Maja Hoffmann, the wealthy Swiss founder of the Luma Foundation, said the site took seven years to build.

Gehry, who also designed Bilbao’s Guggenheim Museum, wrapped 11,000 stainless steel panels around the tower above a huge glass round base. The building reflects the changing lights of the town and the white mountains nearby. Arles has a history of imposing architecture since the ancient Roman theatre and arena already drew large crowds to the city, said the head of Luma Arles, Mustapha Bouhayati. “We’re building the heritage of tomorrow”, he told France24.

Over the summer, 190 people will be working at the creative campus. Apart from creating an “ecosystem for creation”, as Bouhayati phrased it, the shimmering tower should also become an attraction for tourists. Since nearly one in four people in Arles live below the poverty line, Hoffmann hopes more visitors will find their way to the impressive campus in the winter, stimulating the local economy. In the video below you can check out the imposing building.

Read more about built heritage or check out one of the tags below: