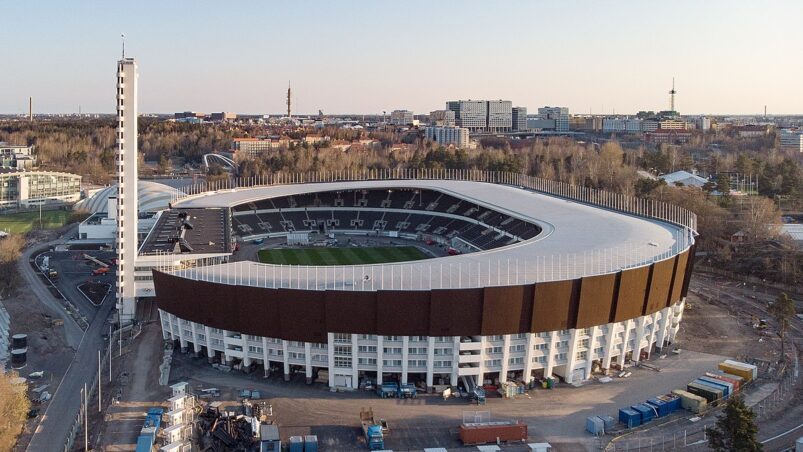 The Finlandia Prize often recognises the history and importance of older buildings in Finnish society. The refurbishment of the iconic stadium not only maintained the integrity of the original architecture but enhanced it, said Paula Vesala, the selector of this year’s Prize. Helsinki included an addition of a multi-purpose extension and a new roof.

Coincidentally, renowned Finnish architect Yrjö Lindegren was involved in the original design of both this year’s winner and last year’s. Last year’s winner was the modernist Serpentine House apartment complex, located in the Käpylä district of Helsinki. The stadium was built for the 1940 Olympics in Helsinki which was postponed to 1952 due to the onset of the Second World War.

The exceptionally large-scale task for the renovation of the Olympic Stadium included the refurbishment of the preserved stadium complex as well as the new multi-purpose halls and the canopy covering the stands. K2S and NRT architects collaborated on this project.

“The renewed Olympic Stadium – a national monument in the heart of the city – presents durable, not expendable Finnish Olympic architecture. The challenge was to create a functional and immemorable entity, where new and old architecture, generated from different functional needs, complement each other down to the last detail,” say the project’s chief designers Kimmo Lintula and Kari Raimoranta.

This is the third time that a refurbishment project has been awarded the Finlandia Prize. Generally, older Finnish buildings are awarded this Prize. This new trend marks a change in the view of heritage and architectural achievements in Finland.

The Stadium is nowadays a famous venue for concerts. Still today, the building and its tower form one of the most iconic landmarks in the city and is one of Finland’s most important Olympic buildings.

Sourced from Yle and ArchInfo.