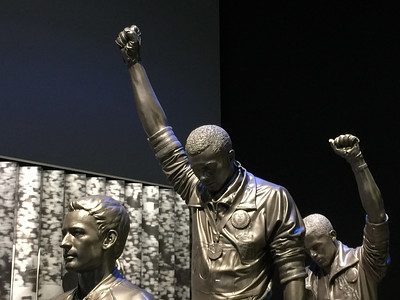 Throughout the history of the modern Olympic Games, designs and posters have been used to symbolise the Olympics, the ideals of the host cities and countries, and sportsmanship. Here are some of the most historic posters of the games.

The first modern Olympics to be held was in Athens in 1898. It did not have a poster but the cover of the Olympic Games program was used. The inscription ‘776-1896’, the horseshoe-shaped stadium, the Acropolis, the Koris – the personification of the Goddess Athena – ready to offer the crown of victory, symbolise the connection between the ancient Games and those of the modern age.

Another beautiful poster is from 1968, Mexico City Olympic Games. It was a black and white graphic design by Lance Wyman and Peter Murdoch. The theme of the games was peace and unity, the legacy of the ancient Olympic games. In the tumultuous atmosphere of 1968 – with student protests and clashes with police in Mexico and around the world and the Civil Rights Movement in the United States – Ramirez Vázquez fought to have the iconic moment that shocked the world included in the Olympiad official video, when the two black athletes, Tommie Smith (gold) and John Carlos (bronze) rose their black-gloved fists in solidarity with the anti-racism movement in the United States

To see the posters and read more on the idea on the designs of the posters, log on to Europeana.