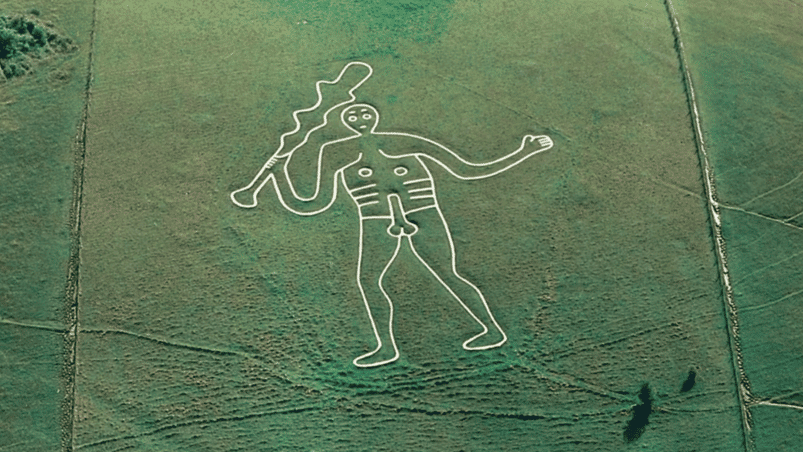 The Cerne Abbas chalk figure turns out to be a Medieval creation, to the surprise of archaeologists.
United Kingdom

Archaeologists have finally figured out when the Cerne Abbas Giant was created. New research has shown the ancient naked figure was sculpted into a chalk hillside in South England during Medieval times. The result surprised scientists and has sparked a theory that the giant was forgotten for generations after its creation.

To figure out the giant’s age, scientists took soil samples from its elbows and feet and analysed them. “Many archaeologists and historians thought he was prehistoric or post-medieval, but not medieval”, Geoarchaeologist Mike Allen told BBC News. “Everyone was wrong, and that makes these results even more exciting.”

Scientists studied the soil samples using technology to show when individual grains of sand in the sediment were last exposed to sunlight. Researchers said material taken from the deepest layer generated a time range of 700 AD to 1100 AD. These dates mean the Saxons, a group of Germanic people who lived in Western Europe, first made the giant. (Text continues below image)

Other samples suggested the giant was made at later dates of up to 1560, while the earliest documentation of the giant is from 1694. Archaeologists were confused by the different dates. National Trust senior archaeologist Martin Papworth explained that “in the 16th century it’s as if the giant’s not there”, while a survey of 1617 makes no mention of his existence.

Papworth’s theory is that the Saxons may have created the giant, but then they neglected the sculpture for several hundred years for an unknown reason. The giant became grassed over before being rediscovered somewhere in the 17th century. “That would explain why he doesn’t appear in the abbey records or Tudor surveys,” Papworth added.

The giant itself is 55 meters high, and it is often thought it depicts a Saxon god or the Roman halfgod Hercules. While its origin and meaning are still debatable, tourists often visit the figure. The giant is also often used in popular culture. In 2007 a colossal Homer Simpson figure was created next to the original figure to promote the new Simpsons movie.