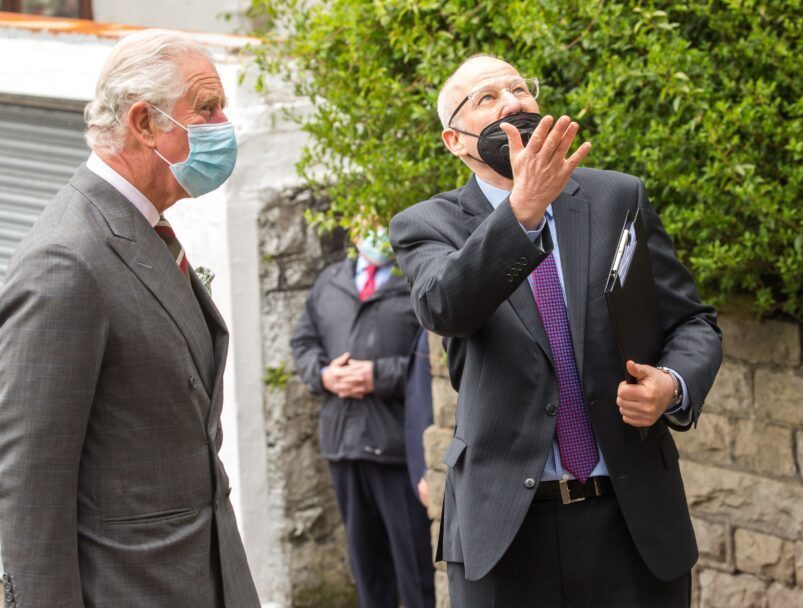 The Foundation for Jewish Heritage had the honour of hosting a visit by His Royal Highness The Prince of Wales to the historic, grade II listed former synagogue in Merthyr Tydfil in Wales.

This was the first visit by His Royal Highness to the synagogue, and he was welcomed by leaders of the Foundation – Chair Dame Helen Hyde DBE, Founder and Chief Executive Michael Mail, Trustees the Rt Hon Jim Murphy and Stephen Goldman, along with Conservation Architect Ashley Davies.

The visit began with The Prince viewing the building’s impressive Victorian Gothic exterior and, as he walked through the building, The Prince received an explanation of the history of the Jewish community of Merthyr, and the Foundation’s future plans to turn the site into a Welsh Jewish Heritage Centre.

The Prince was shown photographs of the building’s interior when it served as a synagogue as well as artist impressions of what it will look like once transformed into the proposed Heritage Centre.

At the end of the visit, The Prince was presented with a striking lino print of the building.

Merthyr Tydfil synagogue was built in the 1870s and functioned until 1983 when the Jewish community formally came to a close. The building was then sold and used for various purposes. However, it has been unoccupied since 2006 and its condition had deteriorated to the extent that it was formally designated as being at risk by Cadw, the Welsh Government’s historic environment service.

The Foundation bought the building in 2019 and carried out urgent repairs in 2020, with 50% funding coming from Cadw. More recently, a business plan for the Heritage Centre was completed in preparation for a National Lottery Heritage Fund submission. When completed, the Centre will present the remarkable 250+ year Jewish experience in Wales, provide a new cultural venue for Merthyr, and promote inter-faith and inter-cultural dialogue.

The Foundation is in regular contact with The Prince’s Foundation which is assisting the project.

Dame Helen Hyde commented: “It has been a great honour to welcome His Royal Highness to the former synagogue of Merthyr Tydfil. The synagogue represents a flagship project for the Foundation and we have an exciting vision for the future of the building which we were thrilled to share with The Prince”.

Michael Mail remarked: “Merthyr Tydfil, which was Wales’s largest town in the 19th century, is home to what is the most important historic synagogue building still standing in Wales. We have been delighted to host this very special visit of The Prince of Wales, which in itself underscores the significance of the building. It is a unique Jewish and Welsh heritage site. His Royal Highness was clearly very interested in the project and our future plans for the synagogue.”

Watch a video of Prince Charles’ visit below: