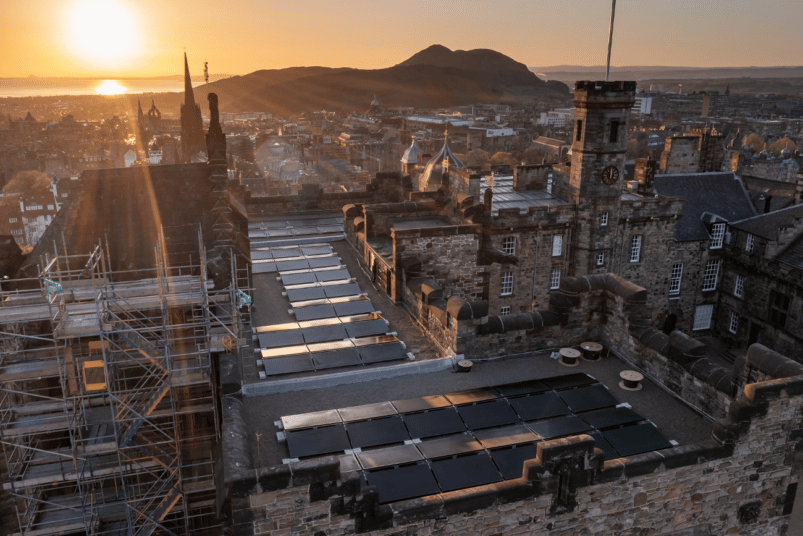 Making built heritage become sustainable is one of the biggest tasks professionals are facing all across Europe. The Scottish National War Memorial at Edinburgh Castle has now taken the first steps, as it had solar panels installed as part of a bid to reduce energy use. The addition of solar panels is part of Historic Environment Scotland’s (HES) initiative to improve energy sustainability across its properties.

HES expects the solar panels to generate approximately 26,500 kWh per year, which is higher than the energy usage of the war memorial building; excess electricity will be used elsewhere at the castle. The site is already doing well when it comes to reducing energy consumption and decreasing associated carbon emissions, even in the years before the pandemic.

Part of the solution

Concerns about how the solar panels might look have already been considered. Since the memorial roof is so high, there is no way people will see the solar panels. HSE sees this as an opportunity not to just manage their own carbon footprint, but also to show that heritage buildings can be sustainable.

David Mitchell, director of conservation at HES, said: “As a major player under the 2009 Climate Change Act, we have a responsibility to lead by example in reducing our carbon emissions, and in developing innovative approaches to promote sustainability.” He stressed that the final plans to install the solar panels consider the ‘historic fabric’ and exterior image of the building. “By pioneering schemes such as this, we can demonstrate that historic buildings are part of the solution to reducing emissions and helping Scotland reach net-zero”, Mitchell concluded.

Putting solar panels on historic buildings can be a controversial topic. If people can see the panels, it may ruin the ‘aesthetic’ of a building, or there may be fears of causing damage to older buildings. However, the war memorial is not the only notable heritage building to successfully make the jump to sustainability, although it is one of the oldest.

The Reichstag in Berlin’s refurbishment in the 1990s and 2000s means that the German parliament runs on entirely renewables. The Vatican too has installed large amounts of solar panels to offset its carbon footprint.

Researchers from Cambridge University have noted that solar panel installations have dropped off in the last few years. They hope that their new study, which shows that adding solar panels to Bath Abbey’s roof would be beneficial not just for sustainability but also for costs. Since older buildings are difficult to insulate, it is hoped that these developments will inspire more heritage sites to look into solar power.

Could Blueways start a new wave in sustainable tourism?

Pressure mounts on UK heritage sector over transparency and greenwashing

Decolonise research to save heritage threatened by climate change