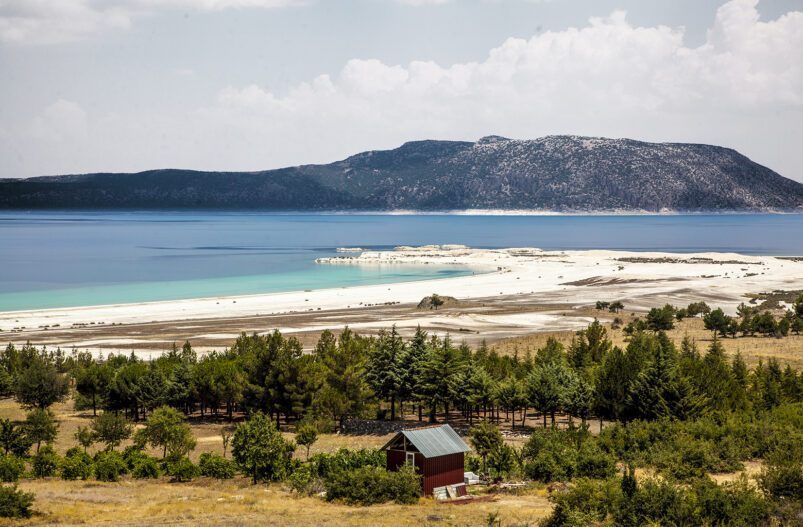 Will the wave of attention destroy the fragile ecosystem that made the Salda Lake famous in the first place? Image: Emre (Flickr) CC BY 2.0
Turkey

Lake Salda in Turkey might become a victim of its unique character. The lake gained international fame after NASA scientists said it could resemble what Mars lakes looked like a billion years ago. Now that president Erdogan announced construction projects near the lake, activists fear too many tourists will visit the remarkable place, with disastrous consequences.

Because of its delicate and closed ecosystem, outside interventions might prove deadly for the animals and microbes living in the pond. “The future of the lake is at risk if millions of people come”, explained Gazi Osman Sakar, Lake Salda Preservation Association head, to France24.

The lake lies in the southwest of Turkey and is known for its white beaches and local plants and animals, such as the Salda seaweed fish. Salda Lake also features minerals of unconventional origin. NASA thinks one of these minerals, hydromagnesite, is similar to the carbonate minerals found at Jezero Crater, a former lake on Mars.

Apart from NASA’s recent research, Turkey’s president Erdogan has also turned his attention towards the lake. He wants to use the lake as part of a project to create more green spaces for public use.

The unique flora and fauna living at Salda Lake is the consequence of its closed ecosystem with its own living mechanism. Geology engineer Servet Cevni worries that human actions, such as tourism or construction, may disrupt that natural heritage. “Because it’s alive, it’s so sensitive to outside interventions,” Cevni said.

If we do destroy the lake further, it won’t ever recover.

Despite this gloomy foresight, nine buildings from Erdogan’s project have already appeared near the lake banks. Cevni reckoned that the damage done can be recovered in 150 to 200 years if people do not destroy it further. “If we do, it won’t ever recover”, he added.

Apart from the construction sites, activists worry about a massive rise in tourists rates. Nearly 1.5 million people visited the lake in 2019, and 800,000 came last year during relaxations in coronavirus restrictions.

As foreign tourists often bring pollution and unknown organisms, it might harm the lake’s ecosystem even more. Sakar is campaigning to put Salda on the World Heritage list to protect the lake from further intervention. For him, it seems like the only option to preserve the lake’s natural heritage. “Salda is dying”, he stated.