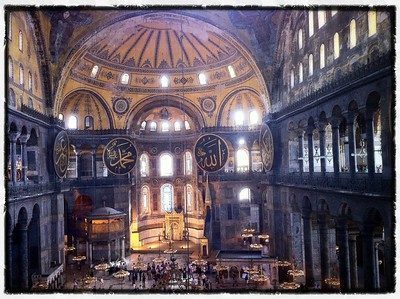 A view of the interiors in Hagia Sophia, Istanbul. Image: abbilder Flickr CC BY SA 2.0
Turkey

ICOMOS and ICOM release a joint statement on Hagia Sophia

ICOM and ICOMOS jointly express their concerns regarding the decision by the Turkish authorities to reverse the status of Hagia Sophia from a museum to a mosque.

The Hagia Sophia has been a museum since the modernisation of Turkey in 1935 under Ataturk, the first President of the Republic of Turkey. Tourists from all over the world visit the World Heritage site to see the motifs of Christianity, Islam and Paganism from different eras. Hagia Sophia is a monument of resilience against time, cultural exchange and religious harmony. Heritage professionals and historians around the world are worried about the implications of the move on the heritage site’s accessibility.

“ICOM has been advocating for decades the role of museums as meeting places open to all people without distinction, a creative space where people can engage with cultural heritage in all its dimensions, connecting past, present and future,” says Alberto Garlandini, ICOM President.

“ICOMOS hopes that the artistic works representing all the cultural layers of Hagia Sophia will continue to be accessible side by side, as has been possible since the creation of the museum in 1934,“ stated Toshiyuki Kono, ICOMOS President.

For these reasons, the organisations concur with UNESCO and the international academia on the matter.