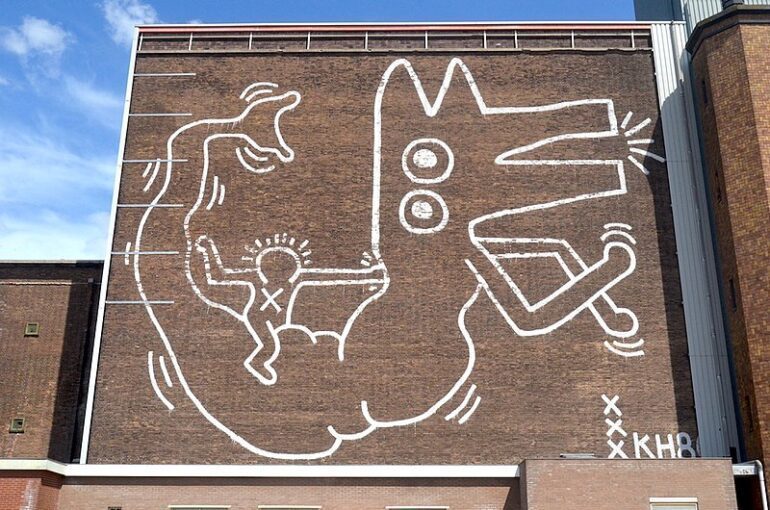 The mural is located in Amsterdam's Central Markthallen. Image: Eriksw Wikimedia CC BY SA 4.0
The Netherlands

Once hidden, Keith Haring’s Amsterdam mural is ready for restoration

Painted in 1986, the mural has suffered paint loss. It was painted by Haring on his visit to Amsterdam for his solo exhibition in Stedelijk Museum. “He was just in a sort of frenzy of painting, and it’s like, ‘Somebody find me a wall!’” says Will Shank, an independent US conservator. Shank and his colleague with his Italian colleague Antonio Rava hope to restore the mural in four to six weeks.

Haring painted directly onto the brick wall a titanium white line without any preliminary sketches, beginning at the top right and gradually working his way down to the lower left. The image measures around 12m by 15m. A highly unusual character of the artwork is a creature with a dog’s head, a caterpillar’s body, human arms and a fish tail, with a person riding its back. “His line was just so self-assured—he didn’t make mistakes,” says Shank, who has also restored deteriorating Haring murals in Paris and Pisa.

Nevertheless,  “some people mentioned that Haring had a hard time getting the paint to stick to the wall because it was blustery and wet,” says Shank.  20% of the white line that Haring painted has not adhered and will have to be inpainted, he estimates. The biggest challenge is the wall itself. It is made of two kinds of bricks—red and yellow—and the yellow ones are less porous and have retained less of the paint.

The mural was covered behind a hoarding for 24 years and was uncovered in 2018. “The metal screen did mostly protect it from the rain and the insects and the birds” for the next two-and-a-half decades, Rava says. There have been calls to restore it ever since.

Read more about the conservation of the mural at The Art Newspaper.