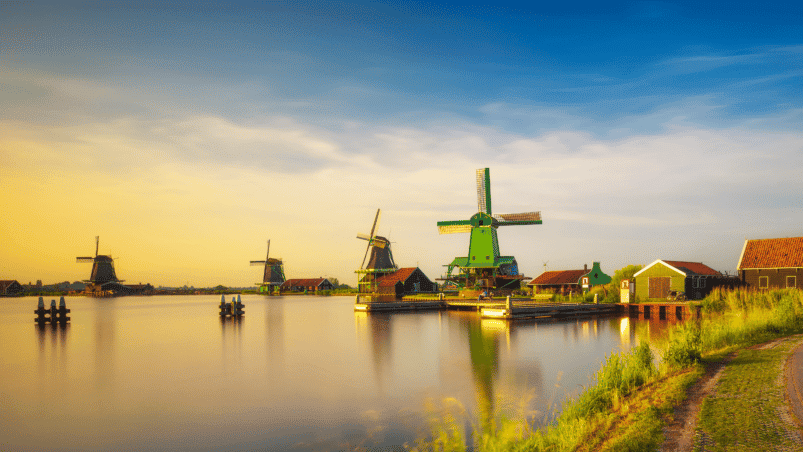 How will the famous windmills at the Zaanse Schans in North Holland cope with the effects of climate change? Image: Nick Fox (Canva) CC0

Researchers are concerned about the future of Dutch cultural heritage. Authorities take little action to protect Dutch tangible heritage against floods, heavy rains and droughts. Can Dutch castles, churches and other monuments withstand the effects of climate change?

Researchers from three Dutch universities listed the risks monuments face concerning climate change, Dutch newspaper NRC reported. They published their findings in two papers and a report. Conclusion: there is too little happening to protect monuments in the Netherlands from the effects of climate change.

The 57 experts interviewed during the research listed 337 possible barriers for the upcoming 30 years. “You can divide them into fifteen sub-categories”, geographer Sandra Fatorić told NRC. For example, which areas will deal with floodings, heavy rain or drought? How many monuments will be affected, and how?

Fatorić noted that the Dutch traditionally focus on flood damage since large parts of the country lie below sea level. Surprisingly, experts expect the most damage from the increasing drought. “In North Holland, many monuments have a foundation of wooden posts”, Fatorić explained. “Due to the drought, groundwater falls and accelerates pile rot.” The study shows that more than 60% of North Holland’s monuments are at high risk. “That’s around 8.500 buildings.” (Text continues below image)

“What’s more important, there is currently no national policy for climate adaptation of cultural heritage”, Fatorić mentioned. A national protection plan lists several essential economically sectors that need safeguarding. But cultural heritage is not part of any of the current federal programs.

Determining the precise value of the industry is difficult, according to Fatorić. “Heritage benefits tourism and recreation.” But some things are too complicated to only express in monetary terms. “Heritage provides historical awareness and can help shape people’s identities.” Sites can also act as a social space within local communities. “Policymakers often do not realize this.”

But what about all the castles, farms and windmills? If they are lost, they are gone forever.

The province of North Holland and the Dutch Cultural Heritage Agency already mentioned they are interested in developing policies and support more research. “But little is happening”, Fatorić said. She realized that cultural heritage is not renewable. “There is always money for buildings such as the Notre Dame. But what about all those castles, farms and windmills? If they are lost, they are gone forever.”

Read more about climate change and cultural heritage, or check out one of the tags below: