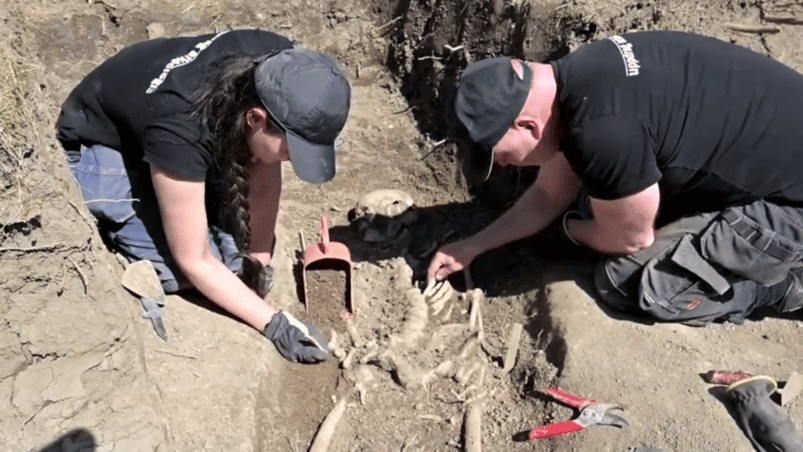 In Sigtuna, a town in Sweden, archaeologists have found the well-preserved skeletons of eight individuals. The four adults and four children were buried in their tombs around 1000 years ago. While it is not the first excavation in Sigtuna, the findings could be a sign of the rise of Christianity in the former Viking settlement.

Archaeologists found the graves when they surveyed an area where a house was going to be built. “The Christian character of the now-excavated graves is obvious because of how the tombs were laid out,” said project manager Johan Runer in a Youtube video. However, these specific laid out graves are the first of their kind near Sigtuna, he told news agency Live Science.

The Swedish archaeologists conducting the excavation suspect that the burial site was used by Norsemen, who converted to Christianity. Christianity first reached Sweden around the 9th century AD, but it took about 200 years for the entire region to become Christian.

Most of the skeletons had been buried flat on their back, towards an east-west position, the company responsible for the excavation, Uppdag arkeologi, stated. The tombs also featured charcoal and burned caskets, suggesting the burials involved fire rituals. The team also discovered several stone cairns on top of the graves. Such aspects were common in Christian Viking period graves but were rarely found in Sigtuna, according to Runer.

The team also found other objects in the Viking burial site, including coin fragments, a fine ornate bone comb, and the remains of a leather belt. The combination of burial gifts and Christian elements shows that these tombs combine several Christian and older grave traditions. Therefore, they can provide new information about the development in the area at the end of the Viking Age (around 1050 AD). The first study results are expected to be published in autumn 2021.

Completion of Sagrada Familia may lead to thousands of evictions