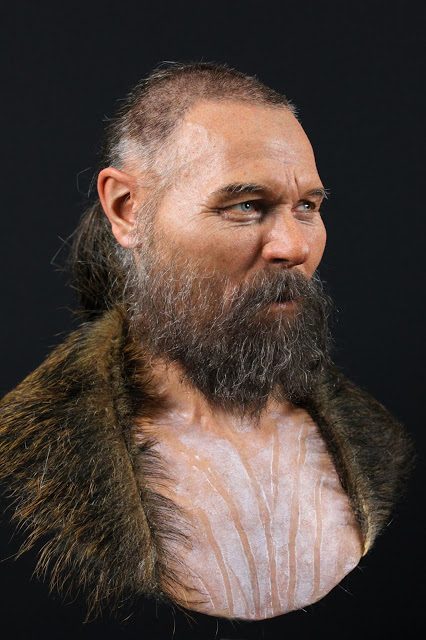 A Swedish archaeologist and sculptor, Oscar Nilsson, reconstructed a skull of a man who lived 8,000 years ago. It is the first facial reconstruction from the human skull discovered in 2012 at Kanaljorden in the town of Motala, Sweden.

According to National Geographic, Kanaljorden is “a curious archaeological site where, sometime around 6,000 B.C., animal and human bones had been deliberately arranged on a submerged stone platform in the center of a small lake. Kanaljorden made international headlines in 2018 when researchers published a report on the excavation, noting that wood preserved inside two of the skulls indicated that at least some of the skulls had been mounted on stakes. It was like nothing the scientists had seen before.”

Live Science explains Nilsson didn’t want to damage the skull. “So he took a CT scan of the specimen and used that data to print a 3D replica of it in vinyl plastic. From there, Nilsson determined how thick to make the man’s facial muscles and skin based on forensic methods that focus on factors such as the man’s weight, height and ethnicity.”

The skull is on exhibit in the Charlottenborgs slott, a museum in the town of Motala.

For more information about the excavation and images of the reconstruction, visit the National Geographic website and the Live Science website.