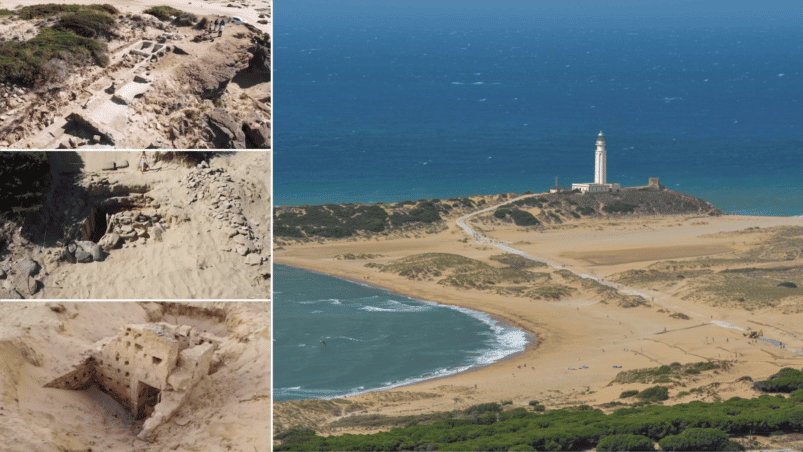 Researchers from the University of Cádiz (UCA) discovered two ancient sites near the town of Barbate in Southern Spain. The archaeologist found an intact prehistoric tomb, a well-preserved Roman bath and salting pools, and medieval ceramic remains near Cape Trafalgar. Archaeologists involved believe the sites are “exceptional heritage finds, totally unpublished to date” within the region.

It is the first time archaeological excavations have been carried out near the Trafalgar lighthouse, the UCA stated in a press release. Researchers had a suspicion that they would find something near the site after studying ground surveys from the 1970s. But the different ages and surprisingly well-preserved status of the finds makes the site “the most important heritage area in the municipality of Barbate”, explained head archaeologist Darío Bernal.

Researchers believe that the burial site was 4000 years old, CNN reported. They found the remains of several individuals inside, along with some grave gifts like shell necklace beads, coloured stones and comb made from bone. Scientists will examine the bones of the individuals to learn more about their way of life.

The Roman remains showed the existence of a seaside village on Cape Trafalgar. The discovery of salting pools, where residents salted food for long-term conservation, and the presence of a fishing processing plant tells researchers much about daily life in the village.

The same goes for the spectacular discovery at the nearby Caños de Meca beach. Researchers found well-preserved Roman baths with walls of more than 4 meters in height. The walls had been covered by sand after the building was abandoned during the Late Antiquity.

The medieval ceramics, found near the Roman bath house, also relates to the nearby village of Beca. Archaeologists hope they can discover more about ancient and 12th and 13th century life on Cape Trafalgar.

Patricia del Pozo, Andalusia’s culture minister, called the finds “wonderful”, adding that the excavations show that the region was “an ​​incredibly attractive area for all types of civilisations, which bears witness to an incredible history.”

The rector of UCA, Francisco Piniella, agreed with the minister. He explained that the area was “a crossroads of cultures and civilisations for thousands of years.” He imagined that the site must have been a natural paradise that “generated an extraordinary cultural heritage that we have to unravel, preserve and disseminate.”