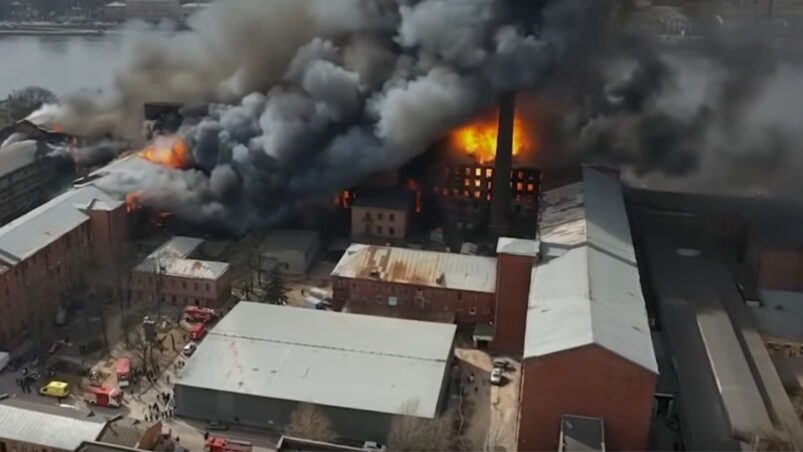 A fire has destroyed the iconic Nevskaya Manufaktura building in St. Petersburg. The former clothes factory, built in 1841, was an imposing landmark of Russia’s second-largest city. As the floorboards and roof of the six-story structure have been severely damaged, it looks like St. Petersburg lost an icon of its industrial past.

For now, the cause of the fire remains unknown. The Russian Emergencies Ministry mentioned 40 people were evacuated from the building. Over 300 firefighters have been working to put out the devastating fire. One day later, the blaze is still not under control, reported state-owned Russian news agency TASS. It concluded that 10.000 square meters of Russia’s industrial heritage lay in ashes. (Text continues below image)

The enormous red-brick building resides on the banks of the Neva river. In the 19th-century, it housed one of Russia’s largest textile producers. During the Soviet era, the government managed the factory. The building became privatised again in 1992. In recent years, it housed small fabric manufacturers and was rented out as an office space, BBC News reported.

Because of its long industrial history, the St. Petersburg municipality listed the factory as a cultural heritage site in 2001. Despite its historical and cultural value for the public, the building lacked safety measures and became a massive fire hazard, France24 reported. The lack of maintenance and following safety regulations results now in the loss of the Nevskaya Manufaktura building and the death of a firefighter. Two other firemen were severely injured. In the video below you can view footage of the burning building.