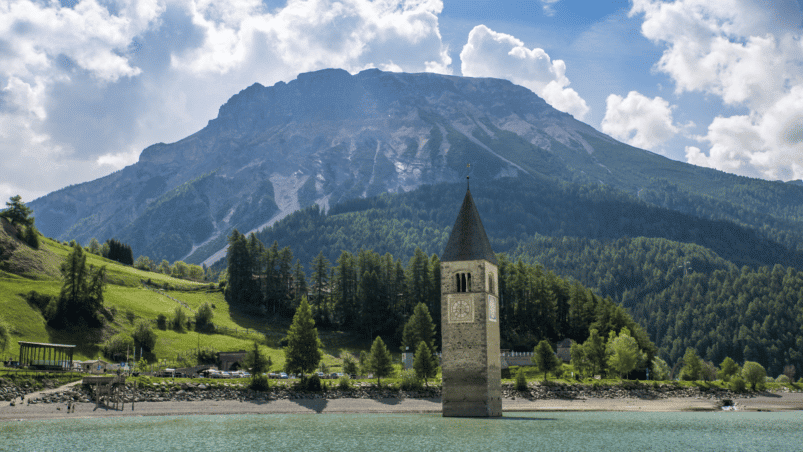 The iconic bell tower is one of the only signs about the existence of Curon that is still visible. Image: Kamadie/Canva (CC0)
Italy

Seventy years after the Italian settlement of Curon was purposely flooded, the sunken town has now submerged from the depths. The only reminder of its existence was the town’s church spire rising out of the middle of the lake. Seven decades later, the rest of Curon sees the light of day as well since the lake has been partially drained.

The Italian town, named Alt Graun in German, lies near the Swiss and Austrian border. It was flooded in 1950 when authorities decided to build a dam and merge two nearby lakes, BBC News reported. Despite the objections of its residents, the site of the former village became the bottom of the Lago di Resia, or Reschensee in German.

Now that the lake has been partially drained for maintenance reasons, residents explored the remains of Curon. Local Luisa Azzolini tweeted that it was a “strange feeling” to be walking amid the rubble of the former village. It has not been decided yet when the lake will be repleted, flooding Curon again. (Text continues below tweet)

The iconic sight of Lake di Resia with its church tower peeping out of the water surface is a popular destination for tourists in winter. You can walk to the bell tower across the frozen lake. The unusual view even inspired a book and a Netflix series. The series, named after Curon, has been dubbed as the “Italian Twin Peaks”, according to NSS Magazine.

Read more about tangible heritage or check out one of the tags below: