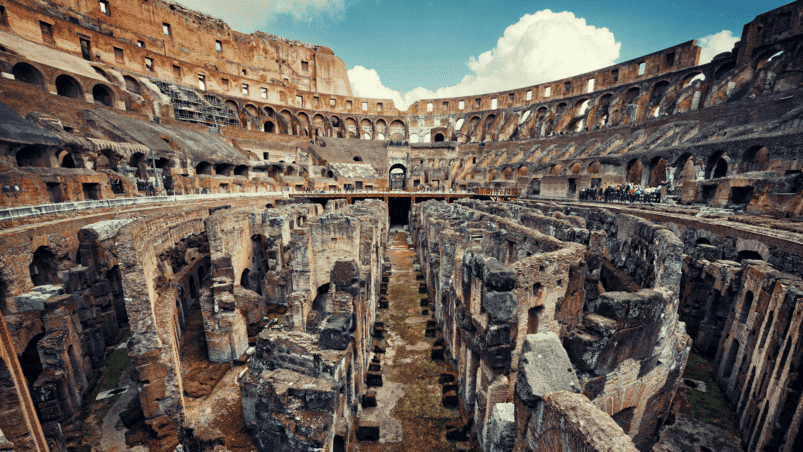 The "backstage" of the Colosseum will open up to the public. Image: rabbit75_cav/Canva
Italy

The ancient catacombs of Rome’s Colosseum will open up to the public. In Roman times, gladiators and animals would wait in the subterranean corridors before entering the famous arena. For the first time in the building’s 2000 year history, tourists can explore the underground levels of the Italian monument.

The catacombs underwent an extensive restoration that took almost a decade. The project was started by Rome’s Archaeological Heritage Department in collaboration with Italian fashion brand Tod’s in 2011. The fashion house contributed around €25M to the renovation plan, news agency CNN reported.

Archaeologists, restorers, engineers and architects worked alongside each other to restore the Roman monument. The experts used photographic surveys, surface mapping and had to wash aways centuries of dirt and microorganisms. To make sure the Colosseum will stand another 2000 years, the restoration team installed a system to reduce water infiltration in stonework, which is one of the leading causes of decay.

Alfonsina Russo, director of the Colosseum Archaeological Park, hopes that visitors will understand better how the Colosseum used to function when they see the catacombs from up close. “This was the backstage of the shows that went on in the area”, she told CNN. Apart from preparing the men and animals for their show in the arena, the technology behind the Colosseum is impressive. “They brought props, men and animals up into the area through a series of elevators and cargo lifts”, Russo explains.

The opening of the Colosseum’s underground corridors marks the end of the lengthy restoration project. However, the Roman monument will continue to undergo construction. In May, the Italian Ministry of Culture announced plans to build a hi-tech arena floor within the landmark. Check out the video below to see how the retractable floor will work.

Read more about heritage and tourism or check out one of the tags below: