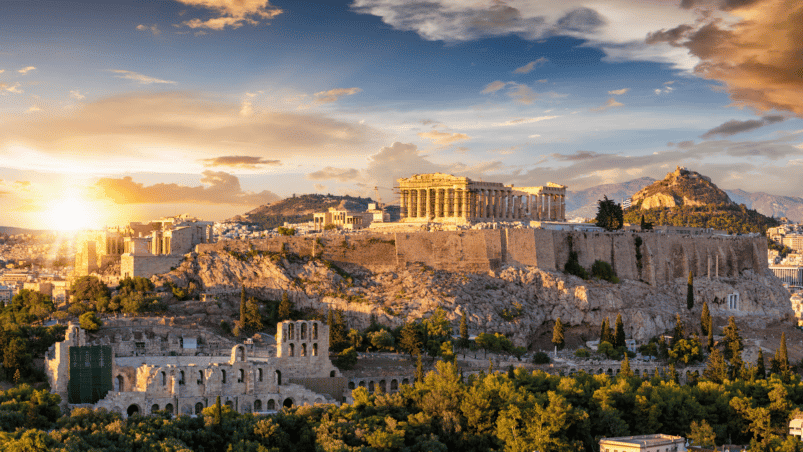 The installation of a new pathway and lift on the ancient Acropolis has Greek citizens divided. Advocates argue that it is now safer for tourists to ascend the famous hill, as visitors in a wheelchair can now visit the temple complex as well. However, some people believe that the recent constructions ruin the classical harmony of the site to allow more tourists to visit.

In May, Greece’s opposition leader Alexis Tsipras demanded that the conservative government “stop abusing our cultural heritage”, according to international news agency Reuters. However, the Culture Ministry believes that the previous pathway was in desperate need of an upgrade, the Greek Herald wrote. The new concrete track is laid over a synthetic membrane that protects the ancient stones underneath and permits easy removal.

Apart from politicians, archaeologist have entered the debate as well. “It’s as if the Parthenon itself has been lowered to street level and surrounded by a cement pavement,” Despoina Koutsoumba, president of the Association of Greek archaeologists, told The Guardian. She believes that these changes are made to give in to the cruise industry to increase the visitor capacity of the monument.

The decision to cover parts of the old rock path will lead to “a degradation of the natural landscape and a devaluation of the rock as a natural monument in its own right”, Tasos Tanoulas, until recently director of restorations at the Acropolis site, added. Over 3.500 agreed as they signed an open letter to remove the new grey concrete path and elevator. The latter is deemed a “modernist eyesore.”

Despite the negative influences, the new walkway and elevator have also received a lot of praise. “I have seen people in wheelchairs who came up for the first time and felt happy”, Greece’s culture minister, Lina Mendoni, stated during a recent visit. “I think this is something that should also make us particularly happy because to give joy to people is perhaps just as significant as the protection of our cultural goods,” she added.

Manolis Korres, the architect who has managed the restoration of the Parthenon for a long time, is optimistic about the “reversible” nature of the new path. “What we have done is patch rock destroyed by the vicissitudes of time”, he told The Guardian. The walkway could be removed in a day’s work, he reckoned. Therefore the original stones are still protected.

There are ambulances up here at least four times a week

Tour guides that show tourists around the famous hill every day agree that the new path was long overdue. “There are ambulances up here at least four times a week,” said Athina Pitaki, who has been guiding visitors around the site since 1978. “I’ve been up here long enough to see all the changes and in reality, it’s much better now.”

While the debate is far from over, Mendoni, an archaeologist herself, is confident that laying a concrete walkway was a good decision. “Whatever you do on the Acropolis ignites debate”, she reckoned. “If you don’t do anything, you’re criticised; if you do, you’re criticised.”