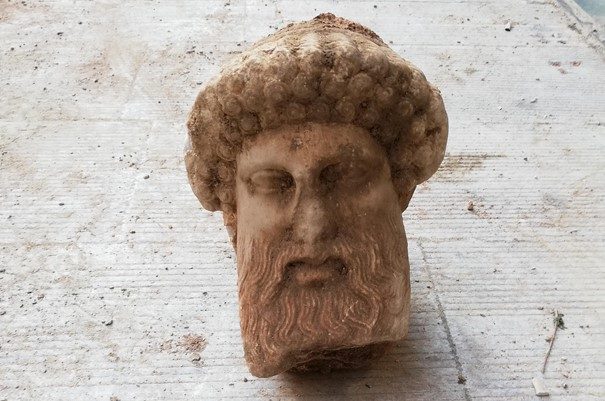 Workers found a marble head of an ancient statue of the Greek god Hermes in the city centre of Athens. The head was found 1,3 metres under the pavement of a busy street during works on a sewer.

The head is “an original artwork dating from the late 4th century BC or the early 3rd century BC”, the Greek Ministry of Culture and Sports said in a statement.

The Mayor of Athens, Kostas Bakoyannis, wrote on Facebook: “It is already under the responsibility of the Ephorate of Antiquities. Unique Athens! We are filled with pride and admiration,” Greek City Times translated.

“It is too soon to draw conclusions, but this head does indeed bear similarities to an important exhibit in the Benaki Museum in Athens,” Greek archaeologist Elsi Spathari told Deutsche Welle.

In Greek mythology, Hermes is the son of Zeus and considered the herald of the gods and the protector of travellers and merchants. The head was part of a herm. In Athens, herms were placed at crossroads and served as road signs.

For more information about Hermes and herms, have a look at the Wikipedia page on Hermes here.

Sources: Greek Ministry of Culture and Sports (in Greek), Greek City Times (in English) and Deutsche Welle (in English).

Local museums struggling to bounce back after Covid-19