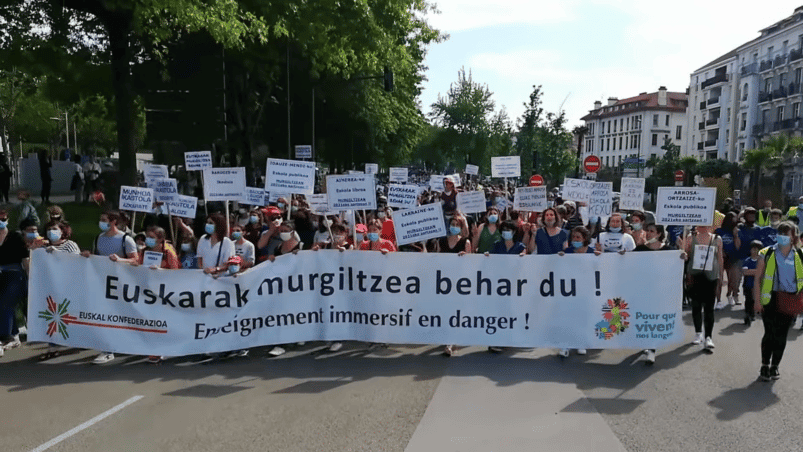 Turmoil in France, where the Constitutional Council scrapped parts of a law that promotes and protects regional languages. In April, the French National Assembly adopted the legislation to teach local speech at primary schools alongside French. After protests from the Ministry of Education, the Council decided to scrap parts of it since they think it is unconstitutional.

The ministry believes that teaching regional languages such as Breton, Corsican or Basque, alongside French, could lead to a poor understanding of the French language, regional newspaper Ouest France wrote. The Council, responsible for judging all French provisional laws, declared that the so-called Molac law would undermine the French Constitution as the second article states that “the language of the French Republic is French.”

Over the past months, defenders of regional languages organised nationwide protests to advocate for the adoption of the law. The legislation’s name bearer, member of parliament Paul Molac from Brittany, was astonished by the Council’s decision to ban two articles from the bill, Reuters reported. “The Council’s censure is incomprehensible for the regions”, Molac stated in a tweet. “We must stop being afraid of regional languages, we should protect, cherish, and save them.” (Text continues below Tweet)

The Council’s ruling has revived an old heritage-fuelled debate in France. In short, it can be brought back to French national sentiments vs. regional and sometimes separatists views. Breton historian Rozenn Milin points the finger towards those opposing the law in an interview with Ouest France. “They do not want living regional languages”, she stated.

Milin notices that opposing parties use rhetoric that dates back to the era of the French Revolution. “The French language is the cement of the nation, and allowing other languages ​​to prosper comes down to threaten the country’s cohesion”, she explains their views. That is why the Council refers to the second article of the Constitution.

However, the second article is one of the youngest amendments, dating from 1992. At the time, the article was presented to combat the use of English words in French, Millin mentioned. “It’s clear that it’s mainly used against languages like Breton”, she believes.

Meanwhile, President Emanuel Macron tried to calm the explosive situation by calling France’s regional languages “a national treasure” in a Facebook post. “All of them, whether they come from our regions in metropolitan France or our overseas territories, continue to enrich our French culture. (…) The same colour, the same accents, the same words: this is not our nation. Braudel writes: France is called diversity”, Macron wrote.

Molac welcomed the presidents’ positive words, but also mentioned that action needs to be taken, according to Ouest France. The MP calls for legislation to change the second article of the Constitution to include regional speech. He hopes the French government and other politicians will help him. “If the President is consistent with what he says, he must initiate a constitutional bill. Right now, it’s gossip”, Molac stated.