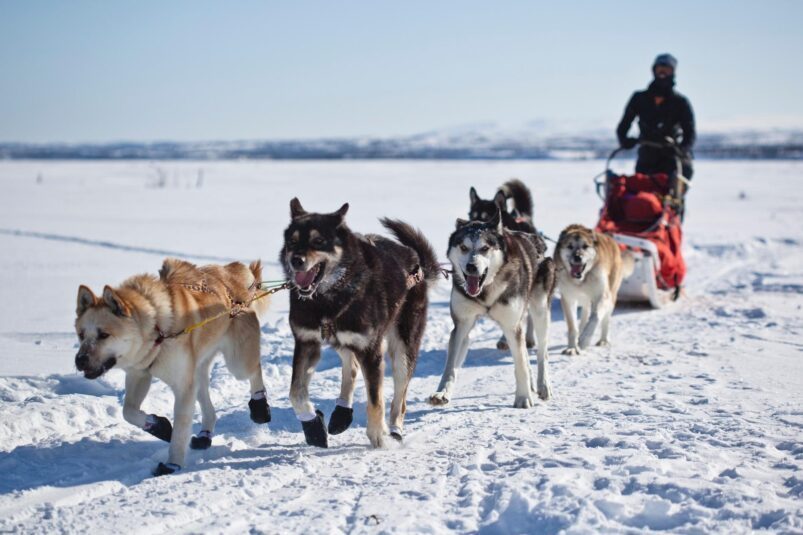 Dog sledding migt be an exciting adventure, but it has little to do with Sámi culture. Image: (Pixnio) CC0
FinlandNorwaySweden

The snowy landscapes of Northern Europe have become a popular tourist spot in recent years. But as travel agencies market Nordic stereotypes to visitors, the culture of the indigenous Sámi is threatened.

According to an article by National Geographic, arctic Europe has become a tourist trap over the past few years. Visitors are eager to go on cross-country skiing trips, witness the mesmerizing northern lights themselves and race through the snowy landscape on a sledge pulled by dogs.

In the last decade, Finland’s tourism revenues in Lapland have risen drastically. Still, Tuomas Aslak Juuso, president of Finland’s Sámi Parliament, representing the 10,000 Sámi who live in the country, is not optimistic about the development. “Dog sledding was borrowed from other cultures and transplanted to Lapland’s tourism scene in the 1980s.” He believes the activity causes ecological, financial and social harm to Sámi reindeer holders and Sámi culture in general. “It is not a part of Sámi or Finnish culture”, Juuso explained.

As travellers’ demand increased, workers were told to dress up and pretend they were Sámi. Even worse, rituals such as the ‘Lapland baptism’, where a shaman in Sámi dress baptizes tourists, are marketed as authentic experiences. These practices create a stereotypical and harmful expectation for tourists and authentic Sámi culture.

The lack of regulation on tourism in this part of arctic Europe causes a mismatch. That’s why the Johtit Project, which translates to ‘on the move’, was founded. The network of 21 Sámi-owned tourism businesses tries to go beyond the stereotypes marketed by foreign companies. Check out their website to learn more about them and the activities their businesses have to offer. If you want to learn more about tourism in Sápmi, click here for the original National Geographic article.