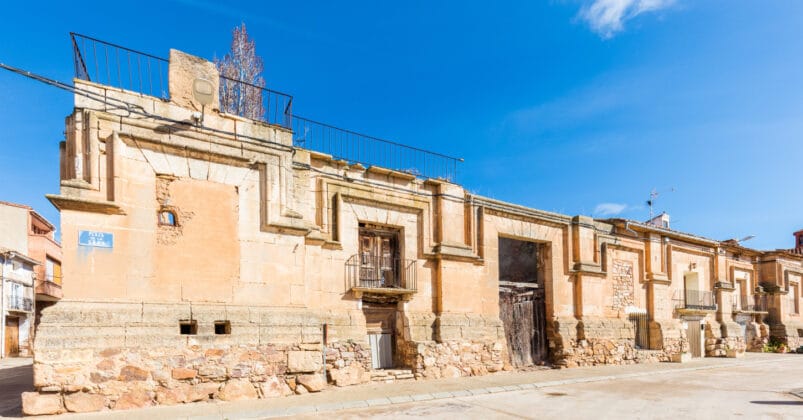 Spain has suffered greatly from rural depopulation in recent years. Many regions used to survive with local agriculture and much of the population worked the land to provide food. In the past few decades, however, most young people have left their home towns to look for better opportunities elsewhere. Modernisation has not been kind to these regions, and now many of these places are falling into disrepair and ruin. Without people to maintain the heritage of these places, the legacy of this region is being gradually lost.

Three young architects are trying to make a difference, by calling attention to the beauty and importance of the historic buildings in these places, and promoting a defence of rural Spanish heritage.

Alberto Sánchez spends his time between the United States, and Used – a small town in the region of Aragon. In 2018, Used had less than 300 inhabitants. To Sánchez, what the town lacks in population, it makes up for in architecture. He purchased a manor house in the town in 2017, and has been gradually restoring it ever since. His journey to restoration is a slow one, and he estimates that it will be decades before the job is done. He has documented much of his progress on the instagram account @casadelpueblo, which provides an insight into how this type of restoration is undertaken.

Guillermo Bosque purchased La Lázara in Spring last year. It’s in better condition than the manor that Sánchez is restoring, but no less characterful. Likely built in the 16th century, La Lázara has been abandoned for decades. The house cost the architect from the Barcelona School less than the price of a car, but has 1000 square meters over three floors. The building is the stately home of the Lázaro family, but the family hadn’t lived there since the 1960s. Bosque has been recording the process on the @la_lazara account.

Ismael Pizarro, a young architect, learned about a house for sale in Used in a similar way. In 2019, he bought a house in the town and another building next to it. His work can be seen @paisajeencontrado. His work is not just on the buildings of the region, but also the landscape. He hopes to use his professional knowledge to provide a space for young scholarship holders, and inspire people to care for both the built and natural heritage of the region.

Fixing up these houses is not necessarily a job for modern materials and techniques. In many cases, it is impossible to use concrete or similar, and so traditional techniques must be used. At La Lázara, Bosque rebuilt some of the wooden beams in the house last year. The wood? Sourced from another old house in the village. Bosque and Sánchez have even begun an association for rural heritage in the region: @asociacionfuset. They hope to use the organisation to host workshops on traditional techniques and build a network for people interested in restoring this heritage.

The approaches are very local, and full of passion. What is known about the old houses is either from local knowledge or from clues within the crumbling walls, such as old papers or graffiti. Returning the heritage to its former glory is not an easy life for the three architects, and each of their instagram pages shows the difficulty of the process. Nevertheless, it is inspiring to see a spark of life in these forgotten towns.

This news was brought to our attention by Miguel, a European Heritage Youth Ambassador.