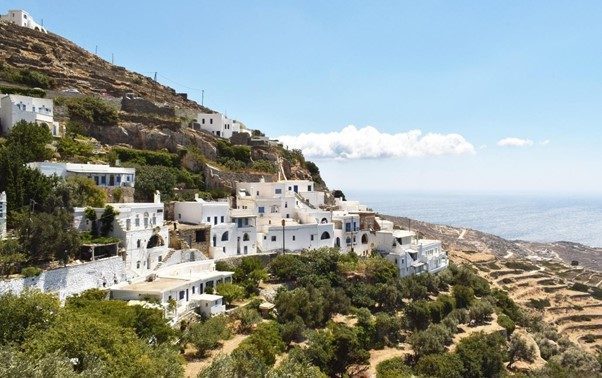 Tinos: View of the Cardiani settlement in Tinos island. Locals and heritage experts warn against the planned installation of wind power infrastructure in this small-scale, layered landscape. Image: Marilena Mela
SponsoredFuture Making in the Anthropocene

Europe’s energy transition is driven by political agendas that work out in different ways on a regional level. This drive has proved to have a great impact on our relationship with our living environment and its heritage values. How can heritage discourse and studies shed light to these challenges? And what role can heritage and landscape values play in global challenges?

Renewable energy is produced using renewable natural resources such as sunlight, wind, water resources (rivers, tides and waves), geothermal heat or biomass. Unlike fossil fuels, these sources are constantly being replenished and can, therefore, in theory never be depleted. In addition, its energy conversion process doesn’t produce carbon emissions which will help achieve European energy and climate objectives. Last but not least, generating clean energy will reduce Europe’s dependency on imported fossil fuels, helping to make energy more affordable. On the other hand, landscape and heritage values of these localities are influenced immensely by energy transition initiatives and in some cases local communities are struggling with the consequences.

Islands are regularly projected as leading places in achieving these objectives due to their geographic autonomy, and their abundance of renewable sources, such as wind, solar and wave energy. This role might seem at odds with the position of islands in the collective imagination: islands are often perceived as remote places, generally serving as a retreat from the hectic urban lifestyles and associated with the healing powers of the sea[i]. Marilena Mela, a researcher within the Heriland project at Vrije Universiteit Amsterdam, believes: ‘Islands should not be regarded as peripheral regions. Looking back into history islands have at times been more cosmopolitan than the mainland.’

Associate professor Linde Egberts, Mela’s supervisor at Vrije Universiteit Amsterdam, calls islands ‘pioneers in the field of renewable energy’.  She regards renewable energy as a way for island communities to express their sense of autonomy and (re-)create their identity, as many examples such as Samsø in Denmark, Goeree-Overflakkee and Ameland in the Netherlands and Orkney islands in Scotland, show.

Mela’s research explores the politics of spatial planning in European landscapes with a focus on islands, building on the interweaving of official and social understandings of heritage. She describes how,  at cases, renewable energy is presented as one of the industries that can promote the islands’ autonomy, and create dialogues with heritage and identity. For example, the research of ethnographer Laura Watts on the Orkney islands in the UK[ii], shows how the archipelago connected its name and livelihood to the renewable energy industry. This can be seen as an episode of the long history of making use of limited resources and finding solutions with what exists in the island territory.

Despite the positive narratives on the potentials of renewable energy projects for island communities, Mela also focuses on cases when renewable energy forms part of a political and economic arena that does not benefit local communities. In the case of many Aegean Islands in Greece, for instance, islanders are reacting against renewable projects, which are planned in a top down way, therefore lacking an understanding of place and failing to address any of the islanders’ problems. A recent Europa Nostra nomination[iii] of five southern European islands as endangered heritage sites stresses the risk of wind turbine installations for these multi-layered landscapes.

Mela’s comparative study of renewable energy planning processes shows how spatial planning is always a negotiation between scales, with enormous variations in outcome and dynamics, adds Linde Egberts. By further focusing her research on islands and visiting their communities, Mela wants to become more familiar with their landscape, cultural values as well as their social structures. Egberts encourages her to ask where landscape and heritage comes in: “Are they always victims of renewable energy planning or can planning discussions become a tool to convey their values more clearly?” In her opinion, heritage and landscape should play a role in gathering various stakeholders around the table.

Because heritage and landscape values aren’t static but dynamic, not only can they have various meanings for different groups but also their meanings and values can change over time. How do heritage and landscape play a role in these planning processes? Mela: ‘We see places in which heritage and landscape values are used to initiate a bottom-up approach or resistance within the island communities. In addition, she finds that the contribution of humanities and social sciences in landscape planning can be beneficial in tackling global challenges that, up to now, are often treated in a hard scientific and technological manner. In her research she aims to hear from the island communities, understand their narratives and create links between places that nobody has before perceived to have something in common.

Egberts’ ambitions range even further than this. As a heritage scholar, she trains a new generation of critical heritage professionals, academics and managers in the world of policy and transformation management. Through this, she aims to enlarge the value of heritage in society, enabling communities to deal with change in the choices they make. Her work with Mela and her research colleagues in Heriland, are an important means to this end.

In her latest article in the ErfgoedDeal magazine, Egberts questions the general perspective towards heritage as being attached to conservation and keeping things the way they are. She argues that the conservation response that is ingrained in heritage professionals and that wanting to preserve what is listed, can sometimes be a pitfall. Climate change and all its challenges can help us think about potential that heritage has for communities. “If things keep changing drastically, we cannot afford to keep on preserving just for the sake of it. Maybe it is time to rethink why we are preserving and challenge ourselves if society might also profit to give something up in order to make room for new things that could become the heritage of future.”

Before her position as a researcher, Mela worked as an architect with award-winning architecture studios in Seville and Athens on the design of cultural and urban projects. The Heriland training programme has challenged her to acquire skills and knowledge and reconsider her view towards heritage, as she became familiar with the field of critical heritage studies, and the holistic concept of landscape. “To work with landscapes means to perceive everything as potential heritage for individuals or communities who attribute value to their surroundings. As a result, these communities should have a say in the transformation of their valued landscapes. But landscapes are not only formed by humans: with the emergence of Post-humanities, and the focus on the rights of other forms of life, heritage and landscape studies become the relevant disciplines to work towards imagining new models of cohabitation and coexistence.”

Future Making in the Anthropocene

This article is part of a series ‘Future Making in the Anthropocene’ that focuses on imagining better-balanced future scenarios for European cities and landscapes, made possible by the generous support of the Creative Industries Fund NL. Information on Marilena Mela’s research can be accessed on the Heriland website.

Dr. Azadeh Arjomand Kermani is researcher and advisor on cultural heritage and participatory practices at Future4Heritage and is also a member of the Centre for Global Heritage and Development.