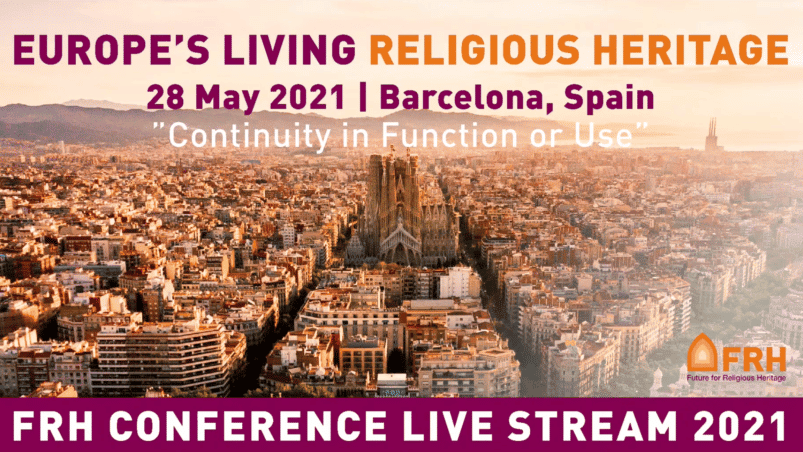 On 28 May 2021, Future for Religious Heritage (FRH) organised an online event: Europe’s Living Religious Heritage. One of the participating organisations, the Dutch organisation Toekomst Religieus Erfgoed, summarised some discussions that took place during the event. Below you can read the translation of this summary.

Lilian Grootswagers is one of the members who contributed to the founding of FRH. She has been chair of the advisory board since November 2020. She has also been closely involved in the format and arrangement of the program.

Grootswagers: “Originally, the idea was to organise the conference in Barcelona. But due to the corona travel restrictions, a physical meeting became impossible, and we turned it into an online event. We were inspired by the Dutch podcast “the Church from all sides.”

The first online event attracted attendees from all over Europe and beyond. The central theme was “Continuity in Function or Use” of religious buildings. Video images were shown alongside discussions, and various heritage professionals spoke. This includes Nigel Walter and Ioannis Poulios, both experts in the living heritage approach. They did research together.

Is a trend break bad?

Poulios: ‘You can ask yourself whether a trend break is bad. In the course of history, all religious places have had to deal with this. For example, monasteries in Greece have known many different times: decline, war, the new heydays of faith. In Russia, Christians are now rediscovering their faith, with buildings playing a renewed role.”

He continues: “The Acropolis in Athens lost its function of faith a long time ago but is still of value. The living heritage approach focuses on traditional values ​​while embracing change, focusing on the core community and embracing others at the same time.”

The story of historic buildings

Walter, a “specialist conservation architect”, mainly works on medieval parish churches in eastern England: “The value of the buildings is in the connection between people and how it has been built and adapted over time. That is the challenge we face as heritage professionals.”

“I like to see historic buildings as living objects”, he explained. “The buildings where I work have often undergone enormous changes several times. There are many stories behind it. The buildings owe their character to what has happened to them over the centuries. And it is because they were able to change that they were able to survive.”

“Yet the standard conservation method treats them as rounded art objects. That approach offers no future for the buildings. That is why I propose to see the buildings as a story that is still developing. A story in which the community plays a role. That community therefore also has something to say about it and is co-owner of the building.”

After this first event, three more will follow this fall:

Read more about religious heritage or check out one of the tags below: