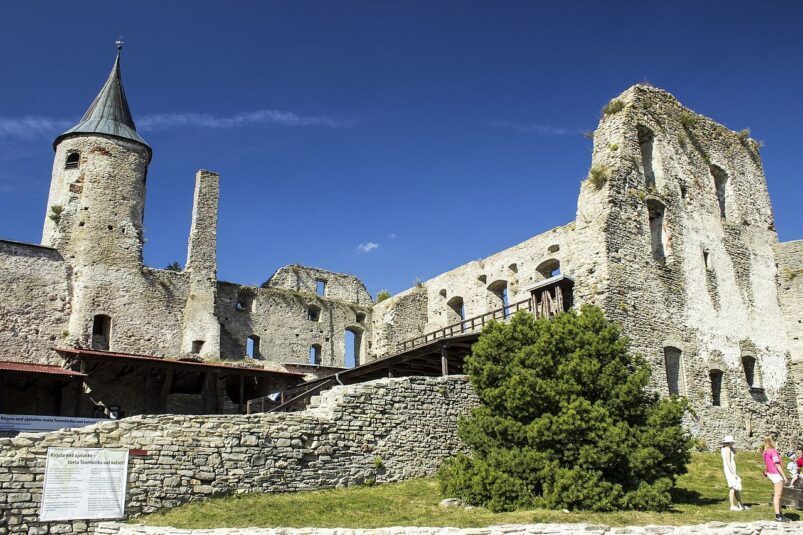 Haapsalu castle in Estonia is one of the 449 nominees. Image: Laime Gütemane (Panoramio) CC BY-SA 3.0
Europe

The European Commission and the Fundació Mies van der Rohe have announced the first group of 449 nominees for the 2022 European Union Prize for Contemporary Architecture –Mies van der Rohe Award. The works will receive competition from the second group of nominees later this year.

Out of the 449 nominees, EHT has selected three constructions that preserve cultural heritage in a unique way.

First up is the colossal Roe & Co distillery, a working distillery and visitor centre for Diageo’s whiskey brand since 2018. The building itself was constructed in 1946 and was used as a powerhouse for the nearby Guinness brewery. During the transformation to a distillery, materials with a raw industrial aesthetic were introduced to the existing brick and steel structure. The structure signifies an important part of Dublin’s industrial heritage.

For a long time, the 13th-century tower of Merola, the only still existing part of Merola Castle, looked like it would certainly collapse. The Catalan municipality of Puig-reig felt like they had to do something and stabilised the tower. Now a wooden structure reinforces the wobbling 14.8-meter high structure. A wooden staircase between the facade and the original tower serves as a tourist attraction nowadays.

The traditional 13th-century castle of the seaside town of Haapsalu has been in ruins since the 17th century. In 2019 the structure reopened its doors to visitors. It now houses a pavilion, steel pathways along the walls and museum on medieval Haapsalu. The architectural design of the renovated castle was made entirely by a 3D laser scan. The building shows a unique mix of Estonian cultural heritage and modern architecture.

If you wish to check out all the nominated works, you can browse through them here.

Learn more about architecture or check out one of the tags below: