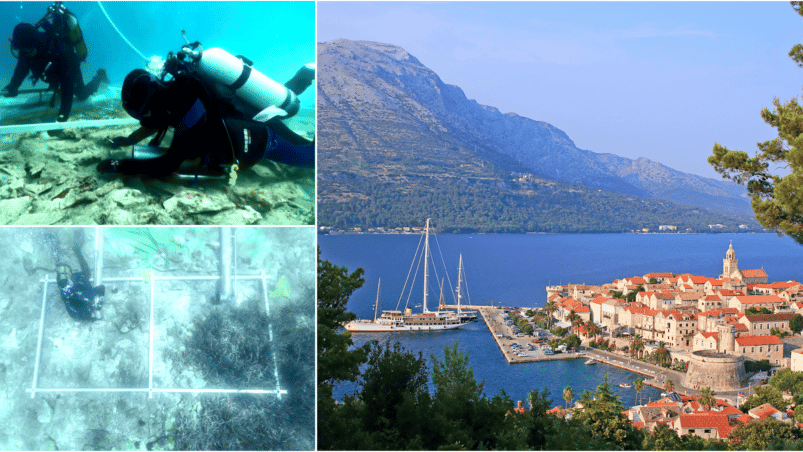 Archaeologists discovered a 6000 year-old settlement of the coast of the Croatian island of Korcula. Image: Reuters & swisshippo/Canva

Archaeologists have discovered the remarkable remains of an ancient village off the coast of Croatia. The Neolithic settlement was connected to the main island by a narrow strip of land some 6000 years ago. Since most Neolithic finds are located in caves, archaeologists deemed the coast village as an “a-typical” discovery.

Researcher Mate Parica spotted the location of the ancient settlement by chance; he told international news agency Reuters. While studying satellite images of Croatia’s his attention was drawn by a large shallow area close to the shore of the Croatian island of Korcula. “I thought: maybe it is natural, maybe not”, said the professor from the University of Zadar.

Together with a colleague, Parica decided to take a dive at the site. The duo believes they found the remains of a Neolithic settlement from around 4500 BC. Apart from discovering the remains of a stone wall that surrounded the settlement, the archaeologists found some tools and objects used by its residents. “We found some ceramic objects and flint knives”, Parica said.

While the spot of the Neolithic settlement is not something the archaeologist had seen before, he believes the location has helped to protect the remains. “The fortunate thing is that this area, unlike most parts of the Mediterranean, is safe from big waves as many islands protect the coast”, Parica explained. “That certainly helped preserve the site from natural destruction.”