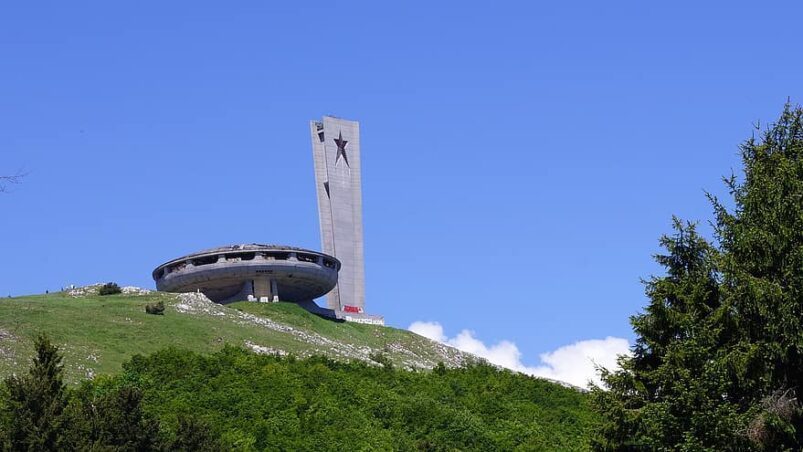 The communist era relic ‘flying saucer’ has fallen into disrepair since the fall of the regime. Now an international team of conservation architects are racing against time to save ‘flying saucer’, the testament to the past.

Nestled in Bulgaria’s central Balkan Mountains, the monument on Buzludzha Peak was dedicated to the glory of communism but since the collapse of that regime, it has fallen into disrepair. As a debate rages on about the site’s long-term future, the team is working to save its striking mosaics.

The monument was erected in 1981 at the Buzludzha Peak (altitude of 1,400 metres/ 4,600 feet). It comprises of a circular structure in concrete and steel alongside two 70-metre-high pillars dominated by a red star. It contained no fewer than 937 square metres of mosaics, a third of which have already been lost. Among the panels are depictions of the entry of the Red Army in September 1944 as well as glorifications of workers, peasants and the role of women in socialist society.

While the hammer and sickle emblem at the centre of the ceiling has survived, parts of the roof have caved in due to neglect. The mosaic portrait of former dictator Todor Zhivkov, meanwhile, has been replaced by a scruffy graffiti version. The marble floor and walls have survived.

“The aim is not to restore the monument in its old splendour,” said Thomas Danzl from Munich’s Technical University, one of the team working at the monument. “We will also keep the graffiti as a sign of the current time, of the past 30 years,” he said.

Danzl says that the works in the monument show similarities to Byzantine tradition but use material and technique that attests to their own time.”We are working on the critical areas while using the least invasive materials possible” for the mosaics while the authorities come up with a plan for the rest of the site, said the technical head of the team, Nikifor Haralampiev from Sofia’s Academy of Fine Arts.

Challenges for funding the monument

Authorities have been careful with releasing funds for the Buzludzha Peak monument communist. They fear that it might create demands for funding for the communist monuments in the country. This is a contentious issue since the restoration project can sharply divide public opinion.

The restoration mission has received a $185,000 (157,000 euros) grant from the American Getty Foundation. This is enough to focus on conserving the fragile mosaics while gaps in the roof are covered with wood and sheet metal to protect them from the elements.

Ivanova, who launched the campaign to save the monument, admits that the monument was used by the communist regime as an instrument of propaganda. This was done, for example, by organising group visits to the site. She proposes that the site should be used to commemorate all of Bulgarian history. But for now it remains to be seen if this will be realised.

Read more on the conservation efforts at France 24.