A worrying amount of demolition in Belgium 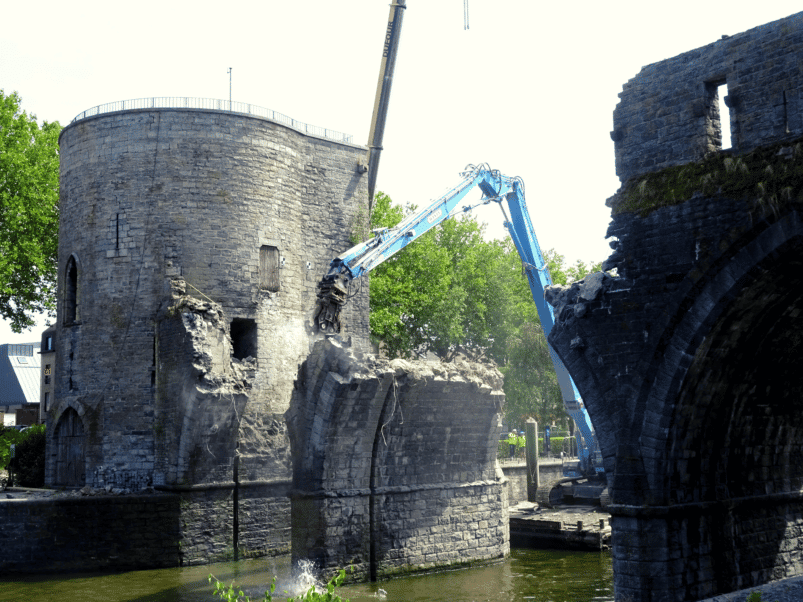 The Pont du Trous in Tournai's middle part is being removed

Since last year a large amount of news has shown up about the demolition of valuable Belgian heritage. Often, the initiatives for demolition seem to have the same background.

For me, the dismantling of the Pont du Trous in Tournai in July of 2019 was a clear sign to pay more attention to what is happening to Belgium’s heritage. The medieval city gate on the Scheldt river has been demolished to make it possible to widen the channel. The reconstruction of the bridge will start next year. The new Pont du Trous will have a wider passage so bigger ships are able to pass.

This example got nationwide attention, but if you follow Facebook posts from Belgium, a worrying development is becoming apparent, especially in Flanders. In the city of Ghent there’s an ongoing battle to preserve the Moederschool from 1913. The school’s location would be used for a new Aldi supermarket. Also in Ghent, a special Lourdes-cave near the monastery of the Brothers of Charity has already been demolished.

This summer, the Facebook-community Sterfgoed (‘dying heritage’) posted about the legal demolition of a building in Blankenberge. This Flemish-style townhouse from 1917 next to the marketplace has to make space for an apartment complex.

Note: since the original article was published, the house has been saved. The provincial government has declared the municipality’s demolition permit to be invalid.

Harbours aren’t safe either. In Ghent, an old concrete factory filled with graffiti was allowed to be demolished last summer. And in Antwerp, big silos and hangars fell victim to sledgehammers. Safe for one brick silo, the SAMGA-buildings at the Noordkasteel are history. Surprising, because in the Netherlands, just north of Belgium, comparable buildings are often saved and given a new purpose.

It’s clear that the development frenzy in Flanders is in its golden age, at the expense of Flemish heritage. A lot of heritage has been included in the Inventory of Immovable Heritage, but local governments can still decide to allow demolition. Clear assessments aren’t always being taken into account and resistance is usually local and limited. This is often because of political interests: a local union of city guides might not want to protest because they get their funds from the same government that permits demolition. On the other hand, in the town of Hove, a political movement has posted a ready-made appeal online to stop the demolition of a turn-of-the-century villa (Dutch).

Important religious heritage is also falling victim to this trend. In Melsbroek, a 200 year old Ursuline monastery has to make way for new MS centre. Again, the municipal government permitted the demolition. To save this characteristic piece of Melsbroek heritage, a committee hopes to collect €5000 so they can hire a lawyer to assist in their lawsuit.

In Gits, West-Flanders, the local monastery has to yield to a new school. The striking building is apparently unfit for another purpose, and the remaining chapel would ‘contrast nicely’ with a modern building! The architect states that not even the facades can be saved. Again, a group of inhabitants and other concerned parties are campaiging to save the monastery.

‘Dement Oostende‘ (Dutch) is the name of a Facebook-community worried about the demolition of valuable heritage in the coastal municipality. At the end of last year, they had some positive news: the court has, for the third time, declared that the demolition permit for the art deco Hotel du Louvre is invalid. Meanwhile, however, real estate developer Desimpel has let the building decay under the eye of the municipal government.

In Belgium, letting heritage decay seems to be an accepted way to eventually get a permit for total destruction and new developments. The fate of castle Goorhof in Grobbendonk has been uncertain for years. In 1999, a fire was started in eight places. After twenty years, nothing has yet been done to repair the castle. It’s about time people start lobbying for better heritage protection in Belgium, and it’s especially important that protesters unite themselves. Thanks to Facebook, it’s clear that a lot more serious matters are going on than we could have guessed.

The situation in Wallonia

In Huy, Wallonia, after a long period of protests the historical villa Maison Janssen was torn down to make space for new houses. In Verviers, a whole historical shopping street had to make way for construction. This street, called the Spintaystraat, contains 21 store fronts, six of which were demolished last October. The city council now wants to demolish the other buildings too, even though they’re in the Inventory and are very distinctive of the city centre. But, the developer wants to build a city mall and the buildings are getting unstable…

The Dutch heritage association ‘Heemschut’ was founded to protect Dutch cultural heritage. Heemschut has expressed its concerns to its Flemish sister organisation, the KVNS. So far, Heemschut has had no reaction. Therefore, we would like a new Belgian non-profit to be founded so that Belgian heritage can be protected more effectively. We’d like to support any initiators. Meanwhile, we’re supporting local organisations and writing to Belgian local authorities.