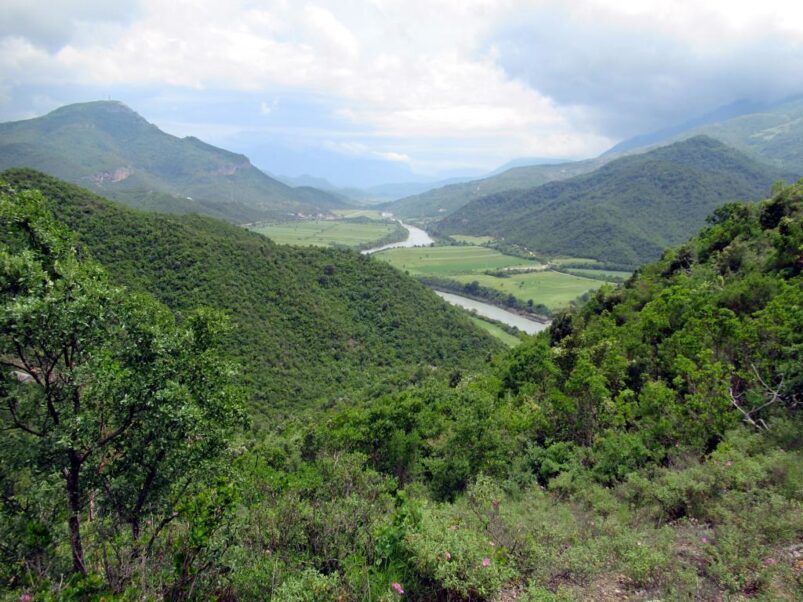 There are many struggles for freedom in the world, but this story highlights the freedom struggle of the one of the very last wild rivers of Europe – river Vjosa in Albania.

While part of the society sees the water as the source of life, the other part sees it as a source of income. As such, most of the best dam-building sites have already been developed and there is not a single river in Europe that has not been dammed. Although Balkans still have 30% of wild rivers, which makes this region the perfect place for hydropower business.

Unity of nature and culture

From the North-West of Greece, where it is called Aoös, to the Adriatic Sea in Albania, the river Vjosa stretches 270km, and is entirely untamed and unspoiled. It represents an uninterrupted expanse of untouched wilderness. Characterized by beautiful canyons, raging streams, islands and curves that create wonderful meanders. Vjosa and its valley is a great mosaic of different habitats; a place of inspiration and source of life for both nature and culture.

Vjosa valley is a center for many traditional pastoral and agricultural human settlements, meaning it is of vital importance to the local, rural economy. Additionally, it is also the inspiration for cultural creation. There are many traditional songs singing about Vjosa.

Vjosa (song for my birth place)

Besides, many girls in Albania are named after the river. The river is a place where youth go swimming in summer, foreigners come to admire it, go kayaking or conduct research… Therefore, it is a great resource and potential for sustainable tourism development that can contribute to the country’s economy.

Vjosa is also one of the rare opportunities for scientists in Europe to observe how natural rivers function. It is a hotspot for biodiversity. Vjosa is home to several fish species endemic to the Balkans. There are 150 species of plants and animals in Vjosa region that are recognized by the Bern Convention, an agreement that aims to conserve European wildlife and natural habitats. It has more than 150 natural monuments as wetland complex of the Vjosa delta-Narta lagoon, Benja thermal springs, Lengarica canyon and many others. It is a patchwork of habitats. So far, several types of habitat of European significance have been identified.

However, despite the outstanding values and importance not only locally, but also globally, Vjosa remains unprotected.

The fight for freedom

The history of the construction of dams in Vjosa started in Greece in 1984. Soon after the first hydropower plant project was designed for Albania. The Kalivaç Dam was firstly granted in 1997, but stopped until 2007. In 2007 the Kalivaç Dam construction started. Initially, financed by the Italian company Becchetti and Deutsche Bank. The Dam was planned to reach the height of 45m, which would result in flooding certain parts of the valley while leaving some dry.

Since 2010 the fight constantly counties. The only way to protect Vjosa forever is to declare it a National Park. Vjosa and its valley will become the first Wild River National Park in Europe. This will not mean just a win for Albania and Europe, but it will be a contribution to a Global Conservation Effort. Therefore, the international NGOs Riverwatch and EuroNatur in collaboration with several local partner organizations such as EcoAlbania, and Patagonia Company have launched the campaign “Save the Blue Heart of Europe “. With the aim of protecting rivers with great natural potentials that lie in Southeast Europe, from destruction through uncontrolled development of hydropower projects.

Would you ever flood the Eiffel Tower in Paris or the Great Wall of China? Well…this is a piece of art too. So support the global and national effort to turn Vjosa into National Park. Only through cross-sector collaboration and support; united work between individuals, society, public and private sector we can assure the protection of River Vjosa forever.

I was born on February 15, 1996 in Belgrade, where I also grew up. I graduated from the School of  Design with a degree in Interior Design and Industrial Products. Then I enrolled at the University of Belgrade, Faculty of Architecture, where in 2018 I completed my bachelor studies. A year later, I won a  DAAD scholarship and started a master’s degree in World Heritage Studies at the Brandenburg  University of Technology, Cottbus, Germany. I am currently writing a master thesis on the topic of folk  beliefs related to the elements of the house and household in East Serbia.

Besides writing the master’s thesis, I am a student assistant in the Department of Architectural  Conservation, I am completing an internship with Publishing for Development, which assists UNESCO in  creating the World Heritage Review Magazine, and I am a part of the Youth Ambassador Program. In  addition, I am working on 195flavors, a team-based Instagram project.